Why I am annoyed with Anonymous

One would be charitable if one said that the relation between the Pirate movement and Anonymous is complicated. On the one hand, there is an unmistakably shared root - we could postpone the lengthy definition of this root by simply calling it "internet culture". On the other hand, there is a definite tendency on the part of the pirates to view Anon as that idiot relative who with random precision manages to do the most unexpected of stupid things at the worst possible moments. 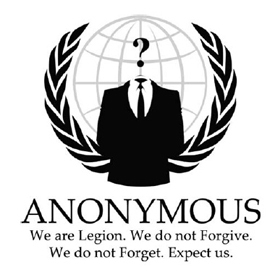 Especially at those very moments.

Anons usually respond by saying that pirates are somewhat of a bore when these sentiments are aired. Which, in a sense, is true; planning and executing long term strategies for achieving realistic copyright and patent reform by feat of talking endlessly at the public opinion and with various interested parties - somehow includes less immediate gratification than doing random pointless overhyped DDoS attacks on arbitrarily chosen targets.

The reason I'm bringing this up right now is a piece of local developments. Rick wrote a summary of what happened, should you want the longer version; the long and the short of it is that a police raid took out a torrent site and generated a lot of political buzz of the good kind. The technical term for this is a "lucky break", and right about here Anonymous enters the picture.

You see, around the same time as this raid happened, some sort of unrelated technical jiffy over at the Pirate Bay took their site offline as well. Which was all manners of bad timing. Anonymous, not being the most patient and studious of non-organizations, immediately connected their paranoid dots and set out to revenge DDoS everything that moved.

I'm not sure what was accomplished by temporarily taking down the central bank of Sweden's website, but they nevertheless did it. And a couple of other seemingly random web sites that looked official, for good measure.

This in and of itself was no big deal. DDoS attacks happen to you just about every day once you reach a certain size or fame, and is to be expected by larger organizations. (Even the Pirate Party of Sweden has had its fair share of it at various times.) It happens, and then it doesn't happen anymore, and everything goes back to normal for everyone (except the computer security guys, who just might get those requests for bigger budgets approved a bit faster).

To give you a reference point: a DDoS attack is a computerized version of having a large number of people calling the same number over and over again until the phone system can't take the load any more. There's no real "hacking" involved in it, and the technical skill involved is akin to pressing the redial on a cell phone. No master hackery required.

What is a big deal is how this overhyped prank got picked up by the national news media. If I were a kind person, I'd say they had a momentary lapse of journalistic sensibility and bought into the hype in a moment of publishing frenzy. If I were a more impartial observer, I'd say they carried on as usual, and thus once again used the kind of language once reserved for such occasions as the reemergence of a fully communist Soviet Union with an unmistakable interest in annexing nearby territories.

If you are the kind of reader who trusts your morning paper, you suddenly "know" that the country of Sweden is under a brutal siege by a mysterious international hacker group by the name of Anonymous.

Remember what I said before about strategic long term reform efforts? This is not conducive to such efforts.

In fact, having the general public up in arms about the Dangerous Hackers could easily be called something very close to the opposite of conducive to such efforts. Which means that we of the political bent have to go from good buzz mode to crisis management mode, which is very much the opposite of a good time.

If this had only happened this one time, I might have shrugged it off as a onetime thing. But it has happened before. It. Has. Happened. Before. And the general pattern of it is that I and my fellow pirates are starting to become very annoyed at these random acts of unstrategic counterproductivity.

The charitable way to summarize the Pirate movement's attitude towards Anonymous is to say that it's complicated. The more honest way is to say there's a wish that these kids go play somewhere where they'll not make too much of a mess of things.

Dear Anonymous: we're expecting you. You are mentioned in our crisis management folders, several unforgettable times. So you'll have to forgive me when I say that you might want to rethink your approach to how to make the world a better place.