Why is school a traumatic experience?

We've all gone to school. It doesn't matter which class we happen to belong to - working class, upper class, struggling remnants of what used to be the middle class. We all went there. 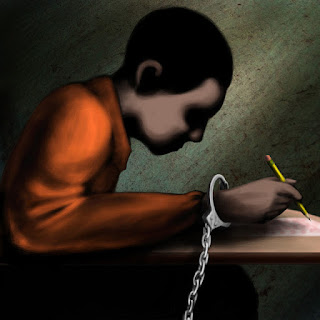 And we all have stories to tell therefrom. Good, bad, indifferent.

The biggest argument in favor of public schooling is that society needs a common fount of shared experience to cohere. Which, in a sense, is true. But it does point towards the question of what these poor pupils really get to learn during these experiences - especially as the notion of them getting their own personal experiences is frowned upon during the process. Johnny can't read, and thus he's not allowed to do anything else until he can.

You learn things in school, and not only those who are specified in the curriculum. Even more effectively, you learn things that are not in the books, by the very design of the school as an institution. Things such as the inevitable ordinariness of rising and shining in the early morn to be punctual and on time yet another ordinary day.

Now, there's nothing in the act of educating children that demands that things begin in the morning hours. The school day could just as well begin at noon without loss of utilized learning potential. But it simply would not do to have a generation of kids who weren't disciplined to rise in time for business hours.

The kids also have to get used to other things. Such as constantly being interrupted. Most brutally through the schedule, where the day is segmented into predetermined blocks of arbitrary content. As soon as one activity is initiated, the bell rings and it is time to go to the next block, which may or may not have any relation to those previous. Which hampers the learning of those interested and uninterested both - those interested are interrupted in their learning, and those uninterested won't have enough time to become interested.

They learn to ramble aimlessly between arbitrary activities, and to indifferently obey the arbitrary instructions given. Without any note of their interests.

Moreover, they learn to be constantly surveilled. Not only by their teachers, whose stated functions are to be present and vigilant, but also by virtue of the records. Everyone present is noted, those not present are sanctioned. Thus they learn to constantly monitor their relationship to the system - no one gets away, even when they get away. Those who do are swiftly punished.

Especially for younger pupils, whose attendance is measured down to the last minute. What is taught by such constant combination of documentation and surveillance?

The definition of being disciplined is the preparedness to be watched. In a strictly controlled environment such as a school, being watched is the default mode. Not just in relation to the teachers and the ever present schedule, but also in relation to other pupils. There are very few private spaces in a school where it's possible to breathe and look less than presentable. They will be seen and noted.

Speaking of other pupils - one of the most repeated lessons is that cooperation and mutual effort is a sin. The words used to describe such behavior tend to be synonymous with "cheating" and "plagiarism". And punished as such. In order to judge and discipline the pupils properly, they need to be taught to do things on their own, and woe betide those who dare to improve their learning capabilities by mobilizing available social resources.

So. What are we teaching kids these days?

To wake early, to arrive on time, to tolerate constant interruptions, to move from one arbitrary boring activity to another, to be constantly watched, to be constantly judged, that cooperation is cheating, and that there is no escape.

If this sounds eerily familiar to being imprisoned - well, Foucault did say that schools, prisons, factories and military bases operate on similar principles. Discipline and punish.

Is it really that strange that many think school was (and still is) a traumatic experience? And is it really necessary to systematically perpetuate these experiences in the name of social cohesion?

There's no lack of those who'd answer yes.

A while back, I wrote a post on Foucault (and the subtle art of freeriding on trains). When writing it, I planned it to be twice as long as it turned out to be. The reason for it being at half length being that as I finished the part on Foucault, I was tired of writing and thus thought that I'd write the second part later. I already knew the general outline, and it would just be a matter of filling in the blanks. Piece of cake. 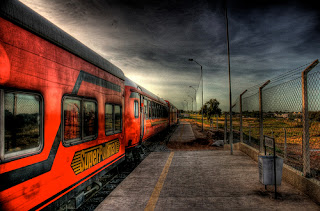 Thing is, I've been thinking I should write that second part ever since. Which is a long time to think about doing something. To make matters worse, I forgot the general outline, because of course, and efforts to recapture it have proved unsuccessful.

Thus, I've decided to unwrite it. That is to say, write something that is not it, but is close enough to put its spirit to rest.

Now, the general metaphor of part one is being on a train without a valid ticket. There is no getting out of the situation, as the train is at once both a moving and confined space. You can either endure the ride, or get caught and suffer the consequences. Which, being a metaphor, transports over to other life situations, be they large or small - you can probably recall similar situations from your own past.

My helpful advice, as someone who surfed these situations freely for years, was the ever helpful imperative to not beat yourself up over it, seeing that the situation did that very efficiently all on its own. It's good advice, to be sure, but it's incomplete.

Hello, Bauman. Your time has come.

Zygmunt Bauman, of sociology fame, wrote about many things. Among these things are parvenus, people who for whatever reason cannot be themselves. Or, to quote him quoting Hannah Arendt, people who are "denied the right to be themselves in anything and in any moment". People who, try as they might, will never quite fit in, even thought they might understand the game better than those who were born to play it.

A prime example of this would be immigrants who excel at learning the culture and customs of their new home. While they may in fact know more about where they are than the natives (pun very intended), there will always be that smidge of "but where are you really from?" clinging to them. And to their children, born and raised right here. They have all the qualifications and pass all the tests for being true citizens, yet they will always be seen as not-quite-it. They are Other, and will always be, even though they are more assimilated than those who would wish them to assimilate.

Ponder the similarities to the ticketless situation. As I galavanted around, I learned the intricacies of the rail system: where connections are made, how to get from one place to another, which part of the train to board to be able to disembark closest to where you're headed - and so on and so on. Useful inside information that I on multiple occasions put to good use in helping confused newcomers. Nevertheless, the fact that they had tickets and I did not created a rift between us that had nothing to do with who knew more about what was going on; the fact that I felt more at home than they did, did not change the fact that they were more at home than me.

The train has the advantage that it is a very confined social situation. The associated anxiety can be dealt with, as it has very definite end states: eventually, you arrive. And there is always the choice of not embarking in the first place - a choice best described by the word 'privilege'.

The aforementioned immigrant, though, does not have this luxury. No matter how hard they work, study and live the 'right' way, they will always be parvenu. Pretenders, impostors, whose scam can be exposed at any moment, for any reason, their loyalty always in question, their sincerity viewed with suspicion even (and especially) when there is no fault to be found. They are not seen as belonging to the legitimate Us that makes the distinction between Us and Them. They are, forever, potentially Them.

This goes for any number of categories, to be sure. Bauman most assuredly did not write about "fake gamer girls", but the principle is the same; no matter how encyclopedic a girl's knowledge of games and game lore is, the notion that she's fake still permeates the situation. Those who deem themselves 'true' have always-already decided the falsehood of those untrue. Yet they keep insisting that the standards of true gamerdom be strived for, even as they deny access to joining their select fellowship.

The omnipresence of these demands to live up to the standards of inclusion is mirrored by the brutal absence of any institution that would officially proclaim them fulfilled. It is not possible to simply buy a ticket and become a member of the club - that's not how these things work. The fate of the parvenu is to endlessly strive to fit in, to succeed at it, and to live it - forever at the mercy of those who would suspect them of not doing any of these things. There is no stamp of approval, only an endless arsenal of stigmas to brand those deemed unworthy.

This is another level of anxiety, different yet similar to that of Foucault. It creates situations wherein one asks for permission, and where this very action denies the possibility of it being given. To invoke a parable from Kafka:

I ran past the first watchman. Then I was horrified, ran back and said to the watchman: "I ran through here while you were looking the other way." The watchman gazed ahead of him and said nothing. "I suppose I really oughtn't to have done it," I said. The watchman still said nothing. "Does your silence indicate permission to pass?". . .


This silence, of course, does not mean either permission or anything else. It only means that nothing has been done yet that warrants action. Yet. But the watchman is still watching, waiting, in case you slip up and prove that you are indeed as fake as suspected. You are never above suspicion; there is always a reason for anxiety.

Yes, the pronoun has shifted. You are in focus now - as a potential terrorist, there's really no reason to ever let you out of range of the watchful eyes of the watchmen. Or the data mining algorithms, as it were. You too are suspect.

And thus, I can finally conclude and complete the advice given in the first post:

Don't beat yourself up over this either.
Posted by Sargoth at 00:02 No comments: