There are two ways to approach the body of knowledge that is rhetoric. One way is as an ancient tradition of social epistemics, detailing the various virtues and practices that one needs to continuously ponder, consider and master in order to gain a proper understanding of one's place in the lifeworld of one's peers. A tracing and retracing of the discourses of relevance that governs the life of those that matter to those people that matter - a techne of the ethics of the social, as it were. A comprehensive, systematic worldview, defining as it is redefining you and your relation to the relating of being human - confronting you with the limitations of what it means to be a meaning subject in human form. 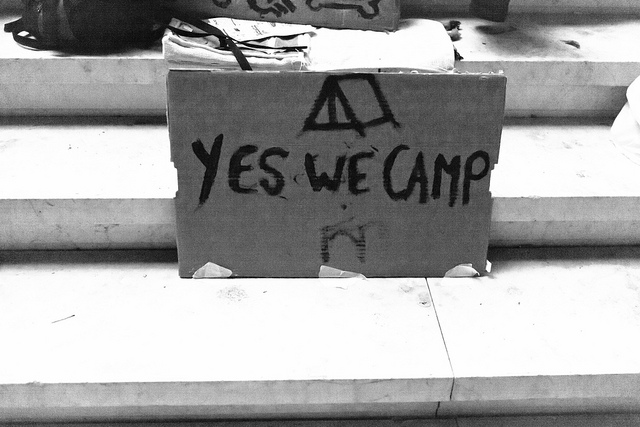 The other way is as a cheat sheet to getting things done.

It is an open question whether the difference in length between the first paragraph and the second is an example of the first or the second way. The rest of this text is going to be written more in the spirit of the second.

So. Without further ado. Here are six utterly concrete ways to win every debate you'll ever happen to find yourself in. Regardless of your eventual knowledge about anything, including the topic of discussion. The first four are about what your opponent is saying, and the last two are about your opponent in general.

1. Make your opponent appear unclear and hard to understand.

One of the more famous examples of this being used is the media treatment of the Occupy movement. Despite the most clear cut political statements made since the "tear down this wall" speech, the general framing of the movement was - you guessed it - that they were unclear, undefined and hard to get a grasp on.

This was no accident. Clearly.

2. Make it look like your opponent is inconsistent and self-contradictory.

It is a generally accepted view that one cannot think both a thing and its opposite at the same time. It's hard to be both for and against the same thing at the same time, and appearing to be on both sides of an issue is either a sign of inexperience, not having thought the thing through or just general stupidity. Neither of which is a positive thing to be - less so to appear to be.

Remember what the ancient Greeks said about the difference between being and appearing to be. It is brutally hard to convey the message that you are when appearing to both be and not be. And with the added bonus of the internet, finding things in the past that is not congruent with what is said today is easier than ever.

Or, as Bill Clinton said recently: "You gotta give him one thing, it takes some brass to attack a guy for doing what you did."

3. Make it look like your opponents position is impossible.

This is more easily said than done. If you know any political persons at all, the one thing you have to do to see this in action is to mention communism. Especially if these people are liberal with a thing against the King of France.

Another issue where you might encounter this is the moon landing. Remember what Kennedy said? "We choose to go to the moon." Despite the fact that we did go to the moon, the impossibility card still finds ways to work its magic. Epic speeches and literal tons of physical evidence to the contrary.

It is indeed impossible to please everyone. But if you can make it appear that a given project is an impossibility, then no sane person would go for it.  Regardless of how possible it actually turns out to be.

4. Make it look like your opponents position is unrealistic.

So, you're a blogger, and want to make it big? Don't be silly. Be realistic. You're just one guy, in fierce competition not only with people writing a lot better than you, but also with every other activity in the world than blog reading.  Get real. It's not gonna happen.

See how that works?

If you are a mean-spirited soul, you use this to limit persons perceived life options. If you have ethics, you're more nuanced about it.

5. Make it look like your opponent is the wrong person to say what he/she's saying.

This is sometimes more easily said than done. If Gandhi would somehow return from the dead and conduct a massive campaign in favor of total global war, the criticism would write itself. On a harder difficulty setting, this can be harder to pull off.

Let's, for instance, take the random good guy Lawrence Lessig. Here's a guy who's done a ton of good stuff, is still doing a ton of good stuff and will most likely continue to do tons of good stuff in the foreseeable future. One would think him immune to the "being the wrong person for the job" argument, but - he isn't. Despite all the good stuff, he's still a human being, and human beings have limitations. One of them being lifespan, meaning that no one person can know everything about everything. There's always some things people don't know, and there's always situations where they are not the right person to speak.

6. Make it look like your opponent are motivated by nefarious motives.

I'm pretty sure a honorable reader as yourself wouldn't stoop to question a fellow human beings motives. In fact, I am convinced that you as a fine specimen of the human race is full of trust and compassion for your brothers and sisters, and that your first and foremost reaction to hearing of tragic news is to try and support the grieving.

Others, on the other hand, are not quite as honorable. They lie, they steal, they do all manner of things in order to further their own profits. And they will not hesitate in masquerading as honorable fellow citizens - for as long as it profits them! But when you least expect it, they will go for the jugular and make your life miserable at every turn!

If you need an example of this, look no further than at the ever so loudmouthed right wing radio talk hosts. There is no end to the bad will the government seems to have against just about everything. About everything.

All of these ways can be used to make someone else look bad. They can also be used in reverse, as hinted above. That is, if one makes something out to be clear, consistent, possible, reasonable, the right character for the job and motivated by a heart of gold - well, who wouldn't go for that?

The thing is that these universal techniques can be used for both good and evil. And, indeed, both good and bad. The reason I wrote this post is not so that you can go out in the world and club random people (not even Lawrence) with your newfound rhetorical prowess. To be sure, you could go out there right now and start making unfriends - but I'm not sure how that would help you in the longer run.

The reason is rather the fact that you will encounter these forms of argument just about everywhere you go, and that you will be immensely helped by knowing about them.

Make no mistake. Sometimes, things are unclear, inconsistent and so forth. But as you now know, there's a difference between being and seeming to be, and in the distance between those two there's ample room for making things seem more or less what they are. And there's no lack of people that makes a hell of a living off of this distance.

Marketing exists, after all. And propaganda.

Learning to detect these things is a good skill to have. Learning to talk back at it even more so.

I would, in my ambition, recommend that you walk the whole nine miles and learn rhetoric in the sense this post started in. The more comprehensive style of thinking that turns every social situation into a window of opportunity, and transforms one's discourse into a reflection of the self as a self-among-others.

Until then - this short cheat sheet. This short introduction to rhetorical self defence. Use it wisely, use it well. And share it to those who might be in need of it.
Posted by Sargoth at 13:42