Lately, I've been thinking a lot about informational ecology. Or, rather, the web of semantic connections that we find ourselves in.

I call it an ecology, because I like the analogy with people who are in tune with nature, and can see things that people why aren't can't. One who has tuned their ears to the sound of birds, their eyes to the tracks of prey, and their nose to the smells of the outdoors - can perceive so much more than the city person who only sees undifferentiated greenery everywhere.

I must admit to being that city person. I hear that birds are around, abstractly know that other living things move about and only sense the scent of nature once a year (when spring overwhelms the lethargy of winter, and then only on that very first day). I couldn't even track my own track record, which might tell you something. 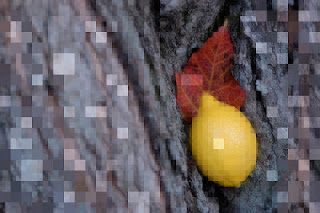 But if you let me loose in a more virtual ecology, on the other hand, I more than make up for this brutal lack of everything. Which manifests itself in various ways - one of them being that you only need to quote a single (nongeneric) line from a song for me to be able to find out which one that is, from which artist and on what album. Not because my memory is any good, mind you, but because I am attuned to the ways of the informational ecology. If there is a trail, I find it, just as a hunter would find the footfalls of a running prey.

Not every bit of information is created equal, though. Song lyrics are particularly easy to find, since there is such a huge demand for them. (An ecological concept, to be sure.) Just retrieving information in general is not that big of a deal - it's low hanging fruit, as it were. It gets trickier as you get deeper into the jungle of semantics and interrelated concepts, and even trickier if you start to include intentionality in the mix.

If we stay with the example of a song lyric: just having the words in front of you is one thing. But to understand that the phrase on line 15 is a reference to this other song, and that this reference in turn forms a pattern over several of the artist's recent albums, that informs any meaningful hermeneutical interpretation of the particular songs of the particular period that the artist made them - is another thing entirely. And to on top of that superimpose the question "what did the artist mean?" -

We are still in the jungle, but to navigate succesfully, you've got to become very much more attuned to those ecological nuances than any five second Google result will make you.

The way to get attuned is to spend time with it. Especially with someone who can tell you those things that are not obvious, but which nevertheless are important to know. When did the band change their drummer? Do you notice the difference in pace before/after they got their first synthesizer? Can you unhear the slow descent into corporate servitude once it is pointed out?

I do, however, need to ponder this further. And, possibly, ingrain myself in a couple of more lines of inquiry. So I will, starting now. -
Posted by Sargoth at 07:45